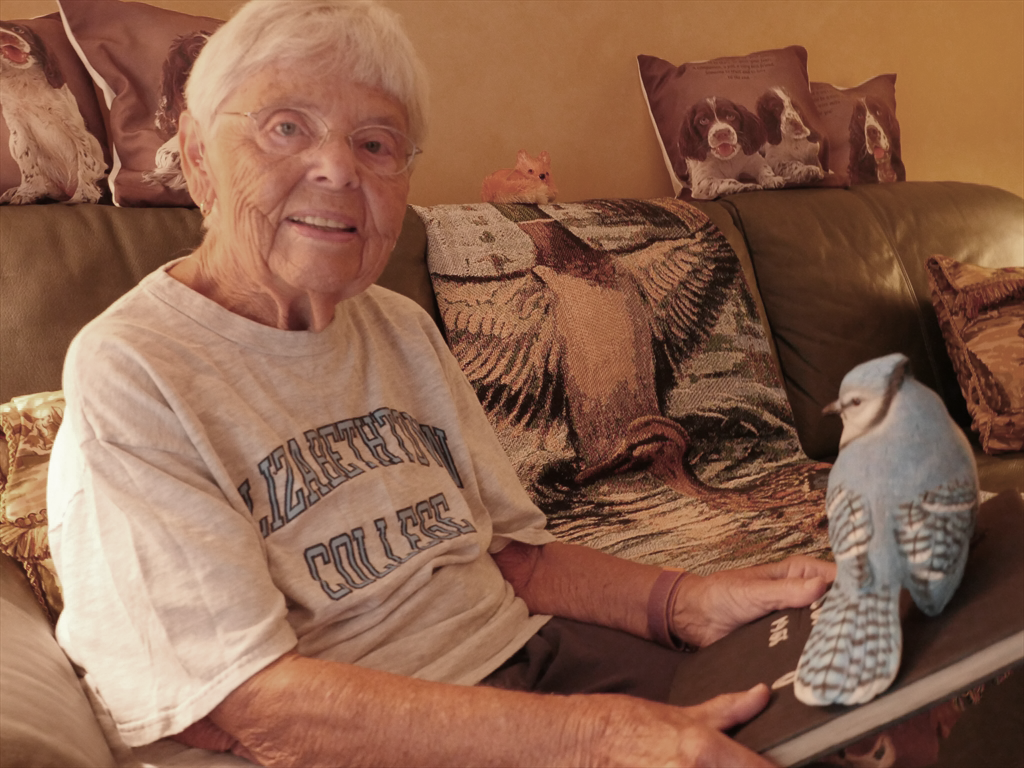 Hazel (Knappenberger) Goodwin ’55 began artful wood carvings nearly 25 years ago. Today, the walls and shelves of her home are adorned with incredibly intricate and magnificent creations, all of which she produced herself. From foxes and birds to flowers and mallard ducks, all her pieces have a story, represent a memory or signify an aspect of nature.

Nothing is as beloved to Hazel as her most recent carving, that of the Etown Blue Jay set perfectly atop an Etown yearbook. The yearbook itself even holds significance as it’s a replica of the 1955 Conestogan, the year Hazel graduated from Etown. She wanted to ensure that her newest creation would have a good home and what better place than at the College. The carving has found a new location at Etown and currently resides in the President’s Conference Room in Alpha Hall. With its vivid blue and vibrant white and gray, it can be seen perched on the windowsill keeping close watch.

Hazel began and finished her professional career as an elementary school teacher. After dedicating her life to teaching youth she retired in the mid-1990’s and was on the search for a new hobby. After visiting a decoy exhibit in Maryland, where she currently resides, she had met a woodcarving instructor and was inspired by his artistry. She explains how she begins the process with a piece of Tupelo wood. Her instructor assists her in developing the general shape of the piece and then she will go in, with smaller tools, and create the finer details on the creatures. Hazel's pieces have even won awards and accolades at various art shows and even the Maryland State Fair.

Etown has always held a special place in Hazel’s heart. Her Etown roots run deep in both her Brethren heritage and her family ties as her brother is also an Etown graduate. She reminisces about her days as a student at Etown and fondly remembers the good times with roommate Lois Kaufman ’55. For these reasons and many more, Hazel is endowing a scholarship to assist future generations of Etown students in their educational journey.